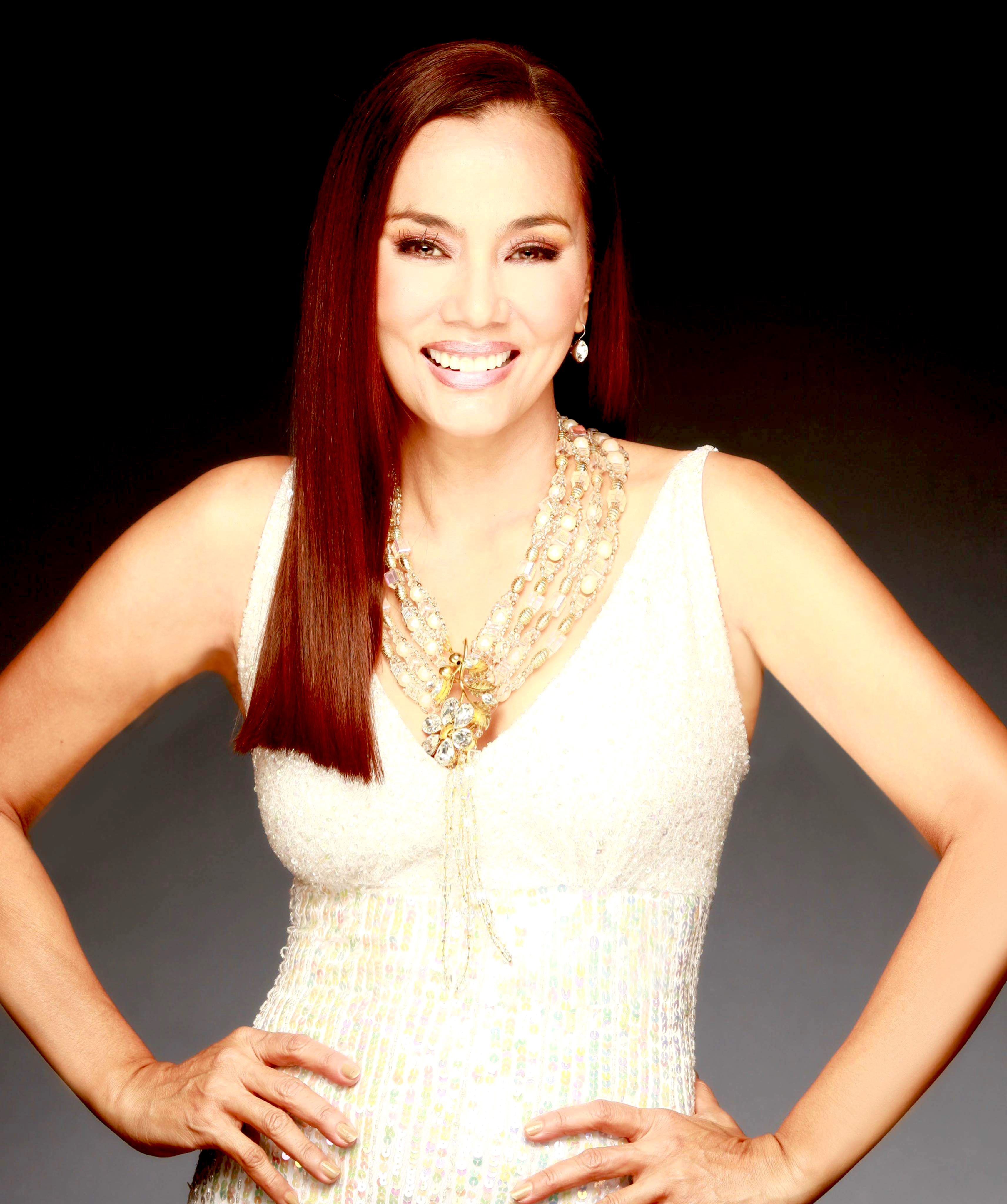 Kuh Ledesma's music career spans 35 years of performances which include more than 1000 concerts, numerous awards in the Philippine music scene, and 20 albums in the local recording industry. She was the first Filipino singer to be the recipient of the Salem Music Awards in March 1989. In 1997 she released an international debut album entitled PRECIOUS, a collaboration of the best American and Filipino songwriters, arrangers and musicians.

Her singing career began when she joined Lastiko, then the Ensalada band in Bacolod while she was still in college taking up Nursing. Kuh and bandmates Toto Gentica and Jet Montelibano later went to Manila and formed the MUSIC & MAGIC band. It was her very successful stint performing with Music & Magic which proved to be pivotal to her career. The strong presence of the group in the live circuit paved the way for Kuh to snag the lead role in Alice Reyes' pop ballet, RAMA HARI. She eventually went solo with her first hit song DITO BA.

Kuh is known for her lavish concept shows, putting up solo concerts in venues like the Cultural Center of the Philippines, Araneta Coliseum, PICC and Folk Arts Theater in the 80's during a time when singers shunned large venues because they were difficult to fill.

She launched an all-Filipino concert AKO AY PILIPINO (1982) at the CCP which featured a repertoire of ethnic sounds, classic kundimans and beautiful pop songs in a refreshing production that displayed Kuh's passion for tapping into the rich node of indegenous art as well as contemporary pop music to produce alternative approaches to songs. The show eventually spinned off into a TV special and a double album.

This was immediately followed by another production at the CCP, INSPIRED MADNESS (1983), created in collaboration with film director Peque Gallaga and musical director Ryan Cayabyab featuring noveau musical arrangements and unconventional production design. In light of the state of the times back then it was also here where we see a glimpse of Kuh's political color as she quietly paid tribute to Ninoy Aquino at the end of the show by singing a beautiful a cappella of "Impossible Dream" and "You'll Never Walk Alone" (translation: "Hindi Ka Nag-iisa"). And she did this in CCP yet! 1984 through 1986 Kuh joined the APO Hiking Society in ANG PINOY NGA NAMAN! 1, 2, and 3 at the Folk Arts Theater.

In the 90's Kuh had a series of back-to-back concerts with foreign artists like Noel Pointer, Jack Jones, and Kenny Rankin (and later with The Platters and Michel Legrand). This later led to the popular POWER OF TWO concert series that had Kuh performing with local artists like Regine Velasquez, Pops Fernandez, and Jaya in a bid to show that artists can work together and go against formula in creating a good show.

Kuh has also appeared in films (ORO PLATA MATA, TINIMBANG ANG LANGIT, THE YEAR OF LIVING DANGEROUSLY) and theater (RAMA HARI and KAPINANGAN), and made numerous TV specials including the award-winning program KUH BY SPECIAL ARRANGEMENT.

Not content with being just a performer, Kuh has also formed her own production company (HEADLINE CONCEPTS), built alternative concert venues like the MUSIC MUSEUM and the REPUBLIC OF MALATE, owns a recording studio (BRAVO RECORDS) -- thus, giving her much artistic freedom and enabling her to produce and market her own work. She is known for looking out for new talents and helping jumpstart their careers through appearances in her concerts.

Kuh has also brough most of her shows abroad like her POWER OF TWO series and her DIVA2DIVA concert with Zsa Zsa Padilla which toured again in the US last November and December. Currently, Kuh marks her importance in the local music scene via rare, talked-about shows and a co-hosting spot in the Sunday variety show, "A.S.A.P. Mania."

Juggling concerts, television appearances, television tapings and album recordings, Kuh opens another venue off Tagaytay called "Hacienda Isabella." Named after her only daughter, the Hacienda is a sprawling property with an expansive garden & lawn and adjacent cottages. It has a huge garden for children to frolic in, game pavillions, outside cinema , a library and a restaurant that serves comfort food, salads and pastas. The venue is ideal for weddings, retreats, seminars, team buildings, parties and outdoor concerts.

In 2012, Kuh took a new step forward in her creative journey with her debut painting exhibition entitled “Unexpected,” which opened on September 13, 2012 at Whitespace Gallery featuring 40 artworks.

ENTERTAINER OF THE YEAR

SINGER OF THE YEAR

MISS POPULAR SINGER-ENTERTAINER OF THE PHILIPPINES

MOST POPULAR SINGER-ENTERTAINER OF THE PHILIPPINES

10 MOST OUTSTANDING SINGERS IN THE PHILIPPINES

VIRGO AWARDS ENTERTAINER OF THE YEAR

THE BEAUTY OF PURPOSE

BEST PERFORMANCE IN A COLLABORATION

BEST PERFORMANCE IN A COLLABORATION

10 MOST OUTSTANDING SINGERS OF THE PHILIPPINES

Performed Odette Quesada's "Till I Met You"

DOUBLE PLATINUM AWARD for "I THINK I'M IN LOVE"

A voice and performance workshop conducted by Kuh for aspiring singers at the Music Museum.

Starring role as a struggling singer that becomes a star with the help of a composer played by Christopher de Leon.
1982

THE YEAR OF LIVING DANGEROUSLY

A tale set in World War II Philippines about how a rich family copes with the war and how the people change amidst violence and death. Its stellar cast included Joel Torre, Cherie Gil, Mitch Valdes, Liza Lorena, Sandy Andolong, Kuh Ledesma and Fides Cuyugan Ascencio, among many others.
Best Movie, 1983 Metro Manila Film Festival, directed by Peque Gallaga.
1983

SINGER OF THE YEAR

10 MOST OUTSTANDING SINGERS OF THE PHILIPPINES

MISS POPULAR SINGER-ENTERTAINER OF THE PHILIPPINES

MOST POPULAR SINGER-ENTERTAINER OF THE PHILIPPINES,

AWARDEE FOR THE EARTH SAVERS' DREAMS.

10 MOST OUTSTANDING SINGERS IN THE PHILIPPINES

Cultural Center of the Philippines, 1980.
The song popularized by Kuh Ledesma "Magbalik Ka Na Mahal" comes from this pop-ballet where she played the singing part of Sita opposite Basil Valdez and Leo Valdez who also starred in this production depicting the life of King Rama (of the South Asian epic, the "Ramayana.") Music by Ryan Cayabyab with Filipino libretto by Bienvenido Lumbera and directed by Alice Reyes.

Manila Metropolitan Theater, 1981.
A drama-musical based on Ricaredo Demetillo's "The Heart of Emptiness Is Black," with Filipino libretto by Orlando Nadres, directed by Behn Cervantes, music by Ryan Cayabyab. It starred Kuh Ledesma as the ill-fated Kapinangan, wife of Datu Sumakwel (Robert Arevalo), who falls in love with Gurunggurung(Hajji Alejandro), Sumakwel's vassal.